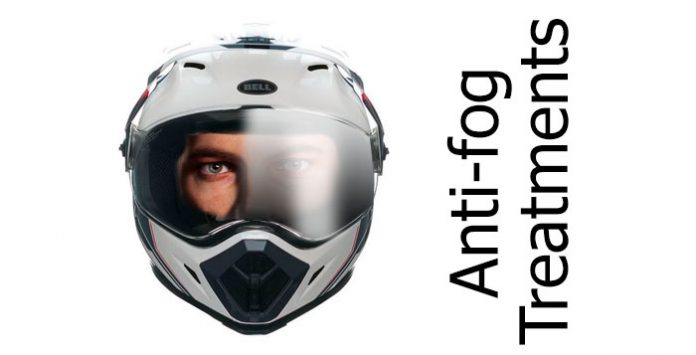 A visor that fogs up is at worse incredibly dangerous – and at best a massive pain in the arse.

Which, when you think about it, is pretty crazy. There’s not many products that are on the market today with such a fundamental flaw in their design!

What’s the best way to a fog free visor?

Having said that, helmet makers do take fogging seriously these days and technology has recently come to our rescue meaning there’s now a number of solutions available.

Gone are the days of spitting on the inside of your visor or coating it with washing up liquid in the vain hope that you’ll be able to see when it drops cold (for most of us anyway).

So if you’re looking to buy a new crash helmet, what should you do to make sure you can ride fog-free?

We reckon anti-fog inserts are your best option for fog-free riding.

There’s various versions available from different manufacturers, but they all work in a similar way.

They’re thin, transparent plastic sheets that attach to the inside of the visor in one way or another (some stick to the inside, others locate between posts on the visor).

They work by stopping the condensation forming on the inside of the visor. Mostly they do this because they have a hydrophillic layer which bonds with the small amount of water that forms on the back of the visor, effectively absorbing the moisture and keeping things clear.

The best known of these treatments is the Pinlock antifog insert. Pinlocks locate between two posts set into the main visor and silicon beading forms a tight bond with the visor around the insert, stopping moisture getting trapped between the two surfaces. Here’s more information about Pinlock and the types of Pinlocks available.

Pinlocks are becoming increasingly common supplied in the box with the helmet. If you’re after a helmet that comes with a Pinlock (or has a Pinlock-ready visor) click this Pinlock Helmets link.

We recommend you buy an anti-fog from either Sportsbikeshop or GetGeared.  They both offer a good range of anti-fog inserts – including Pinlocks – and are both based in the UK with decent prices and excellent service.

Click here for more info on our recommended retailers.

While lots of helmet makers have done a deal with Pinlock to include them with the helmet, other makers are taking their own route.

LS2 for example have produced their own version of Pinlock, called Fog Fighter. Just like Pinlocks, these have locating pins set into the main visor that hold the insert in place (just watch out because they look like Pinlocks but the pins are set slightly lower on the visor).

Bell’s ProVision is supplied already fitted to the visors of some new helmets – like the Bell Eliminator – so you don’t have to fit it yourself and there aren’t any locating pins.

Bob Heath is an old, long-established British company based in Walsall in the West Midlands. Unlike Pinlock and Fog Fighter, Bob Heath anti-fog Fog Demons – adhere to the inside of the visor. But they work in a similar way to the others and often work just as well. In fact, the first anti-fog film I ever used was a Bob Heath Fog Demon and worked fantastically well for years when stuck to the inside of my old Shoei.

There’s a ton of other anti-fog sprays, treatments, unctions and ointments on the market that all try and stop your visor fogging up.

Most aren’t that cheap and aim to coat the inside of the visor with a chemical surfactant that breaks the surface tension of the droplet, thereby dissipating the blob of water and giving clear vision.

In my experience, they all work reasonably badly and in the worst cases can be downright dangerous. I recently tested a Bob Heath spray on the inside of my IS17 HJC and my vision was so badly affected I had to wash it off as soon as I could. Any moisture forming on the inside of the visor was indeed dealt with by the spray; but instead formed a waxy, oily gunge that blurred the world and could’ve been catastrophic if it was at night.

Having said that, I’ve a feeling the visor contributed a bit to the problem; but it wasn’t good.

In summary – the best anti-fog treatments?

We’ll be testing some other anti-fog treatments on a variety of helmets – and adding information here as we do.

However, at the moment, a quality anti-fog insert such as Pinlock or Bob Heath seems to be the way to go. And if you can get one included with your new helmet, then happy days.

If you’re looking to buy a new crash helmet that’s either Pinlock-ready or comes with a Pinlock anti-fog in the box, then visit our Pinlock crash helmets page.