I’ve been to quite a few bike shows over the years – and I’ve usually had half an eye on the crash helmets for sale there. The word has traditionally been that motorcycle shows are a great place to pick up a bargain – line ends and lines that won’t shift being flogged off cheap there.

Well that certainly used to be the case but more recently I’ve noticed that whereas you used to get some of the larger retailers and even a sprinkling of crash helmet manufacturers turning up at shows, over recent years, there’s been an invasion of what seem like market traders moving in to cash in. Now, far be it from me to cast aspersions over the quality of their products and their motivations – we all need to make a bob or two and fair play to em – they’ve seen an opportunity and put money on the line to try and get a return on their investment. But as a punter looking for a bargain from, what I perceived as a reputable retailer, I became a bit disillusioned and have, over the last few years, kept my money in my pocket.

Last year however things seemed to change. Don’t know if it was Carole Nash’s involvement in the NEC show, but the whole affair seemed to have stepped up a gear. Lots of manufacturers showing full ranges of bikes – and the retailers seemingly having upped their games too. And along with that, there were a few helmet vendors there offering real bargains, including the late George White Ltd. So much so that I picked up a nice AGV S-4 lid from them for £45 in red & white.

It’s a lovely lightweight lid that, surprisingly, fitted my head shape where most AGVs never had. OK, on trying out the helmet on a blast over the moors, I did notice the visor lit up like a kaleidoscope when any point of bright light hit it – which is a bit worrying and, on reflection (no pun intended), is probably the reason they flogged em off so cheap. And with visors coming in at around £30+ these days, maybe it wasn’t the bargain I’d hoped for.

Having said that my bro also picked up a bright yellow flip up BMW lid to match his S1000RR and I’ve heard no moaning there. So go in with your eyes open. I guess it’s like any purchase – if it’s on offer ask why and check the helmet out from every angle to make sure you’re happy you’re not buying a dud.

Read the follow up – including the scary thing I found out about the visor (wooOOooo!) in Bike Shows Pt2. 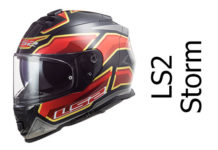 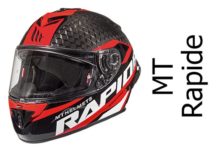