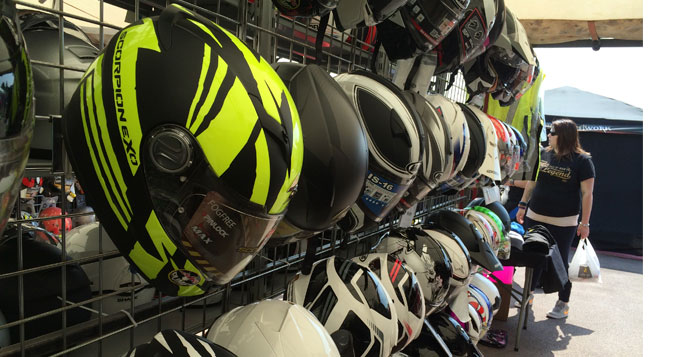 As a follow up to a previous article on crash helmets for sale at a motorcycle show (in this case the fantastic Carole Nash Show at Birmingham NEC) here’s a word of warning:

If it looks too good to be true, it usually is!

Sorry if I sound like your granddad but I’m a sucker for a bargain. So when I saw the AGV S-4 I thought, ‘I’ll have a bit of that, thank you very much.’ As revealed, the S-4 is a composite fibre helmet that rates 5 stars on the SHARP crash helmet test. So I was chuffed to find it for £45 at the show!

But given that I’ve also got a Craft carbon fibre helmet (looks well cool) and an old Shoei (dead practical) it’s been sat on a shelf in the garage for a while gathering dust. So, I thought I’d get it out and take it on a recent blast over the Pennines to clear its vents and have a good look at the visor problem. The forecast was dry, I’d got a full tank of juice, off I went.

Problem No.1. I picked up the helmet by the chin guard and pressed onto one of the vent grills with a thumb. Cue tiny snapping sound! One of the grills now presses in slightly where it shouldn’t do. Oh bum.

Other than that, the helmet is nice and light (1.35 Kg is pretty light for a full face helmet) and fits well. I’ve found that in the past about AGVs – whereas the Shoei and Craft touch your head all over, the AGV seems to lift the polystyrene slightly away from your head by using raised cheek and forehead pads which gives a nice feeling that you’re not really wearing a crash helmet. Odd, but nice.

Anyhow, there I was blasting over my local track, sorry A-road, and predictably – since the weather girl said it would be nice and dry – it began to spit with rain. So, what do you do when your visor becomes blurred? You wipe it with your glove. And that was where problem No. 2 became evident. You see, it was really hard to clear the visor. Whereas wiping the visor with a gloved finger clears the visor with my other helmets – here, it seemed to blur it. And when things did dry up when it stopped raining, it looked like the visor was all fogged up on the inside – and even cracking the visor didn’t help at all.

It was all very odd. But it wasn’t until I got home and checked the visor that I found the problem. It wasn’t fogging at all – the bleedin thing was scratching! All I’d been doing when wiping the visor was putting a zillion tiny scratches into the surface of the visor so that it now looks like it’s been wet n dried! After about 30 minutes riding and wiping, it was so clouded it wasn’t safe to use. So I didn’t. I popped the visor up and spent all the journey home wiping road grit (rhymes with grit anyhow!) out of my eyes and cursing the retailer (more of whom later).

Now, I’ve been riding since before the ‘anti scratch visor law’ came in in the 80’s. But if you haven’t, visors used to be made of perspex and you used to rattle through the things. It wasn’t uncommon to have to change them every month they scratched that badly. So most of the time you rode around with semi-opaque visors of doom giving the daylight hours an eerily dusty look like looking through a loosely-woven shroud – which in the case of many riders it might as well have been since they caused lots of accidents and eventually culminated in anti-scratch visors being compulsory. We moaned like crazy because anti-scratch visors were really expensive – but quickly shut up once we had the revelation of clear un-frosted vision and a life expectancy measured in decades, not hours.

We take them for granted nowadays of course. Or I would’ve done if it wasn’t for my last ride! And I’d not, for a minute, thought that I ought to be checking the visor to make sure it’s anti-scratch when buying a new crash helmet. In fact, I expected that it’d be illegal to sell a crash helmet without an anti-scratch visor (which it is – though how you tell is a little open to debate – more of which in a future article).

So I did a bit of digging and found out there are lots of people having the same problem with the S-4 and the Stealth models. One guy even had words with a number of AGV bods and discovered it’s because they’ve outsourced the manufacturing of some of their ‘lower end’ helmets to China and they’ve cut corners with the anti-scratch and anti-fog coatings on the visors. Apparently scratch testing is conducted under dry conditions and this allowed these visors to pass the test. I do find it hard to believe they’d pass any kind of test with the speed and extent my visor scratched, but I’ve no reason to doubt his findings. See the thread here.

So I’m going to get in touch with AGV and see if they’ll put the matter right. In my opinion, these visors could be lethal and at the very least should be withdrawn and replaced – even if the helmet was bought at a knock down price. In my case, it was bought from George White and I’d be going back to them if they hadn’t gone pop last year. Until then, it’s going back on the shelf to gather more dust. Hopefully AGV will do the right thing. I’ll report back here when I hear.