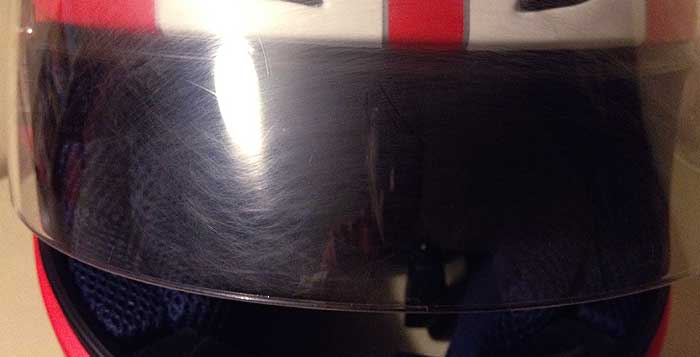 So, we’ve all got an anti scratch visor on these days. And when the sun comes out, many of us stick in a tinted visor too. But what’s legal and what’s not?

Tinted Visor
To be legal, the consensus view seems to be that a tinted visor should allow more than 50% of light through. If it’s more tinted than that, then it’s illegal – as a rule of thumb. However things are actually a little more complex than that (aren’t they always?!)

For a start, the police have been instructed by the Association of Chief Police Officers to – get this – Use Common Sense when dealing with riders using tinted visors (must be a leap year!) That means if the visor’s being used during the day and in good visibility, then that’s generally fine. If it’s not being used in appropriate conditions, generally a slap on the wrist and a good stern talking to is advised. I guess stories of coppers removing visors at the side of the road and sending bikers on their way isn’t good PR (and potentially incredibly dangerous) so thankfully they seem to have seen sense. One caveat here is that police policies blow with the wind and change from force to force – so there may not be a totally consistent implementation across the country.

The Department of Transport say that a visor has to have ‘Daytime use only’ stamped on them if they’re unsuitable for night use. They should also have an E in a circle (the international approval mark) together with the country number (E11 is the UK). Tinted visors should also bear the stamp of BS4110:1979 or Council Directive 89/686/EEC.

However, now we’re part of the EU, tinted visors don’t necessarily need to be Kitemark approved. As long as the visor exceeds European-wide standards, then it’s fine.

Some more reading on UK legislation on another site can be found here.

For info about the AGV antiscratch visor problem read this article.

Similar to tinted visors, it seems anti scratch visors are legal as long as they exceed the UK standard.  They should be stamped with X, XA, YA or ZA to show they conform to the relevant anti scratch visor legislation. If it’s not stamped, it’s not legal. If you buy from a non-reputable dealer, at least check the visor to make sure you don’t come a cropper, because you may get some dosh off the helmet but be stung with having to replace the visor (and they can cost £30+).

So there you go. If you’ve any experience of coming a cropper of these regs – please share with the rest of us by adding a comment below. Thanks.